Mahavatar Babaji is also known as Moola Guru ( creator of Moooldhara Chakra ), is called Root Chakra of all Chakras,is the source of Kundalini Chakra.

Mahavatar Babaji’s name is given by his disciple and Yogi Sr Lahiri Mahasaya,. The image of Babaji is as an immortal & Universal Guru and beyond the conception of the birth-death. I can strongly say that Yes, He is living around us but in another dimension. We can reach him through only Kriya Yoga by changing the frequency.

“Love is the undisturbed balance that binds this Universe Together”

It is often said that there are some places in life that you can only go to when some spiritual power calls you and I experienced it more profoundly when I visited Mahavatar Babaji cave.

The Cave of Mahavatar Babaji

Suggested Read- The Best time to visit Mahavatar Babaji Cave in the Himalayas?

Dunagiri with all kinds of beauty with sprawling meadows, dense forests, and a healing aura that radiated from the many shrines. The entire place was crawling with pilgrims and devotees all in intense meditation.  Mahavatar Babaji miracles are his teachings at the cave where his presence can feel in the heart.  There are many  Mahavatar Babaji stories that roll out among his devotees.  One story, I feel in my heart is that He is still around us.

A mountaintop trek is about 4  km 1/2 hour high up to Pandukholi from small hamlet Kukuchina and from the mountaintop trek down up to Mahavatar Babaji cave ( 30 minutes ) get a very difficult trek, I got to experience, however, as I started my journey I realized that I had nothing to worry about.

The entire area was quiet, there was complete silence except for the soft purrs of the flowing water & chirping Himalayan birds.

The air was so fresh that my lungs seemed to want more and more. It was a pleasant surprise after breathing the dark smoky polluted air of the city life.

The Mahavatar Babaji Caves is the perfect place to head over to and bask in the glorious tranquillity with a dash of fascinating history about the saint.

Suggested Read – Haidakhan Baba Ashram: A Revelation In The Himalayas

Before we headed to the magical caves, we took a detour and admired the view of the great Himalayas from the Dunagiri Temple.

After this, we visited the wonderful and powerful Dunagiri Shakti Peetha, which was filled with more than 1500 big ringings bells.

Projected Itineraries are as follows;

For those who want to make a visit with some other places 3 Nights 4 Days then this itinerary will help to chalk out the program.

This is a recommended tour itinerary for those who would like to follow the path of  Paramahansa Yogananda Ji 6 Nights 7 Days. 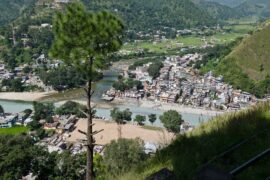 The Shanti Mantras or The Himalayan Soul Healing Rituals