Rishikesh to Vashishta Gufa Distance is  25 km from Ram Jhula, Rishikesh, located by the roadside on Rishikesh-Badrinath Highway,  in the complex of Swami Purshottamanand Ashram, Gullar near Sirasu Village.

How To Reach Vashistha Cave Rishikesh

Rom Ram Jhula or Lakshman Jhula Rishikesh, Vashistha Cave Rishikesh is at a distance of 25 km by road on the Badrinath Road from Rishikesh

In the Afternoon It will reopen at 03:00 PM up to 07:00 PM.  But I have observed that some days the Vashistha Cave remains open all day long.

Suggested Read- Why Should You avoid visiting Rishikesh in July & August

Take a five-minute beach walk downriver  from Vashistha Cave, there is another Gufa or Cave which is  known as the “Jesus cave.”  Jesus cave sets on the side of an almost vertical cliff on the river banks of mother Ganga.

The cave has a river-facing view and the surrounding green hill of the Himalayas. The name is derived from the old tradition that Jesus spent time here along with mother Ganga.

Sri Isha(Jesus) lived for some time during his visit to the Himalayas. In the last century, both Swami Rama Tirtha and Swami (Papa) Ramdas lived here  (at different times space ), and both had visions of Isha meditation here.

Aa per the history of  Kashmiri tradition, the Rajatarangini, written in the year 1148 A.D.,  explains that a great saint named Issana lived at Issabar on the bank of Dal Lake. Moreover, the Book, titled, “Jesus who lived in India” has provided much evidence to us.

Vashishta Cave or Vashishta Gufa is an ancient  Gufa where  Vashishta Maharshi meditated with his wife for years. As legends say that Sage Vasishta Maharshi was a manas Putra (human son) of Lord Brahma and one of the seven great Rishis (Saptarishi)

The Vashishta Gufa is perched among  Gullar trees on the bank of  Ganga is an ideal place for meditation practice.

If you are at the Vashishta Gufa, do not miss to visit the Samadhi Sthal of Sri Prusottamananda Swami.

The cave is about 20-25 feet deep long, so easily 10-15 Yoga aspirants can accommodate inside and, moreover the bank of the river Ganges here provides you enough space to accommodate thousands of visitors. Thus, the Ashram location is the best place for one-day Yoga Retreats near Rishikesh.

Suggested Read- Why Sri Kunjapuri Temple is the Best for Yoga & Meditation? 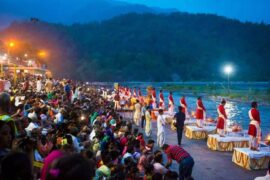 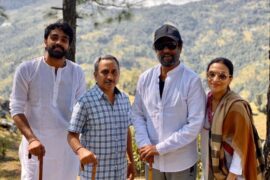 An Article About A Guru Mahavatar Babaji who Inspired Rajinikanth 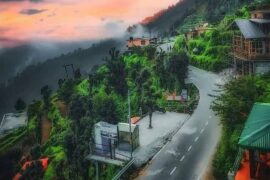 Kanatal – An  Unexplored Hamlet in Uttarakhand