Ranikhet Visiting Places – A Serene Town In The Lap Of Nature

Ranikhet weather makes Ranikhet a ‘Paradise of Nature lovers’. And Ranikhet Temperature  is awesome  –“The one who hasn’t visited Ranikhet has not visited India.” It is famous as ”  Ranikhet Visiting Places- A Serene Town In The Lap Of Nature “

The most demanding hill station is Ranikhet from Nainital.  a snowy town embraced with plenty of natural scenes. During summers, this cool hamlet is jampacked with visitors. If you’ve not visited it yet, do plan your next trip to Ranikhet India  –  this awesome cool town upgraded by the Mahavatar Babaji Cave.

Ranikhet is a beautiful settlement based in the mountains of Kumaon. Surrounded by snowy sky-touching mountains, beautiful valleys, tall pine and oak trees, lush green land, curvy streams, and beauteous ancient old temples, Ranikhet is indeed a perfect hill station spot to enjoy the chilling moments during the sizzling hot seasons. There is plenty of accommodation at Ranikhet Hotels.

The must-visit places nearby Ranikhet are –

Suggested Read – Patal Bhuvaneshwar- A Journey To the Shiva Cave

Suggested Read – A Date With The Saint: Kainchi Dham- Nainital

Well, all seasons are good to visit Ranikhet, but the best season to visit the place is between March to June when the weather is normal. If you want to visit Ranikhet during winter, the best time would be between September to November.

Ranikhet from Delhi is not very far by road, It is about a day road trip from Delhi to reach Ranikhet via Nainital Neem Karoli Baba Ashram.

By Road-  Delhi To Nainital, about  300 km from Nainital to Ranikhet measures about 80 km.

By Train-  New Delhi Railway Station to Kathgodam Railway station and then after road drive up to Ranikhet approx 100 km 3 hr. 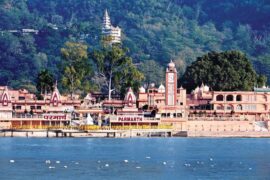