Trekking in Uttarakhand, particularly in the Garhwal Himalayas is a sacred site for the Hindus. The Gangotri Glacier source of the Ganga River, Kuari Pass (India’s highest peak), and Nandi Devi are some of its major attractions while there are many lesser-known ones like the Yamunotri holy waters and Kedarnath mountain peak.

The Best Time for Trekking in Uttarakhand

While it’s a suitable tourist destination throughout the year because of its scenic beauty but the best time to visit this area is between the months of April – May, or the post-monsoon in late September to November when weather conditions are at their laps.

You’ll be surprised to find that you can access the Himalayas from just about anywhere. Some of India’s most famous hill stations are right here in this region and include; Mussoorie, Nainital, Dhanaulti, Lansdowne, Sattal, Almora, Kausani, Bhimtal, and Ranikhet.

The hill stations are lovely places to enjoy the mountains and relax but the more adventurous will venture out beyond to explore all of the trekking options in this part of the massive mountain range.

An eight-day journey up the Himalayas from Kausani in India to Roopkund Lake is quite a spectacular one. The lake itself, known as Mystery Lake for its huge collection of human skeletons that were found floating upon it after a terrible disaster thousands of years ago deserves some recognition, and not just because of these skeletons. It is an awe-inspiring sight.

It is one of Uttarakhand’s most beautiful and spectacular treks. The trail leads hikers through Govind National Park and offers a breathtaking view of the snow-capped peaks and sage-covered plateaus that surround it, although be warned there are not many places to stay along the route, so you will need to carry your supplies with you.

Uttarakhand is known for its lakes, glaciers, and the rivers like the Ganges flow. However, the gem that this state holds is the Valley of Flowers National Park. This protected area has more than 10000 species of plants.

The place attracts tourists from all over the world because of its scenic landscape. It also holds great significance to both Hindu as well as Buddhist mythology.

Kuari Pass Trek, or the snowy pass of India, is a six-day trek along the Himalayan mountain slopes of Bhilangana. If you are looking for an exciting hiking or trekking experience in India then this is the best destination for you!

Pindari Glacier trek is one of the most popular treks in the Uttarakhand mountain range. The trek follows a well-established trail from Pindari village to the glacier and is 90km in length. Located between two other famous peaks, Nanda Devi and Nanda Kot, Pindari Glacier rests at about 17,400 feet above sea level.

A famous pilgrim route in Uttarakhand, Gangotri is the starting point of all holy rivers. The Gangotri Pilgrim Route offers you a spectacular, magnificent landscape in the Garhwal region with mighty Himalayan peaks visible from everywhere and snow-covered peaks visible during the peak season.

A 5-day trek to the source of the Ganga has been arranged by Nainital District Tourism Development Board where every step represents a splendid scenario in this pious land.

Reaching the Khatling Glacier won’t be easy. In fact, it’ll require a 120-kilometer 7 Days trek through dense jungles. But the journey will be more than worth all of the sweat you work up because on a clear day you have such a picturesque view of the Thalay Sagar Wall, Jaonli Glacier, and much, much more! 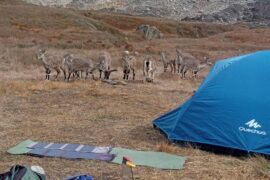 Gangotri National Park: An Overview about the Tourist Attractions 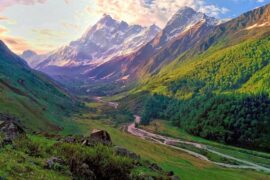 6 Treks From Rishikesh: A write-Up On Some Best Treks Destinations 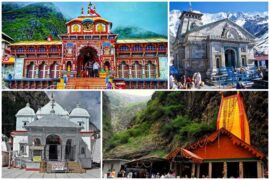