Dev Prayag- The Significance of the Pind Daan Ritual at Sangam

Dev Prayag  Sangam is the confluence of holy rivers and the place where the name of the Holy river, Ganga derived. It lies in the Tehri Garhwal District of Uttarakhand. Devprayag Sangam is said to be the location of the Navel of God Vishnu.

Now, the place holds very important ritual significance among the Hindu pilgrims while visiting the Char Dham Yatra in the Uttarakhand Himalayas. The Significance of the Pind Daan Ritual at Dev Prayag is found in the Hindu Vedic literature dating back to thousands of years.

The Legend Behind Rituals

According to the Hindu legend  Sury Vanshi king, Dilipa’s son Bhagirath was performing penance in the Himalayas. He wanted to bring down the river Ganga on the earth from heaven because the only mother the Ganges could liberate Bhagirath’s ancestors who were seeking liberation from the cycle of birth and rebirth.

The Legend of the Mother Ganges

After many years of invocations and hardship, king  Bhagirath succeeded to please his mother Ganga. The mother Ganga whispered from the sky  “I am ready to descend to earth to liberate your ancestors but you cannot stop my mighty tides and flow. I might wash away the whole earth and finish up in Patal Lok.”

Bhgirath was puzzled, he begged the mother Ganga to indicate a solution. Mother Ganga replied that only Lord Shiva has the potential and fearlessness to channelize my tides and mighty flow.

If Shiva agrees to channelize me in between his matted hair on his head, then, it would be a great favor for humankind in pursuit of Moksha of everyone.

Hearing this, Bhagirath prayed to Lord Shiva.  Shiva was pleased by his prayers & devotion. Finally, Shiva agreed to channelize the flow and tides and let the mother  Ganga flow down from his matted hair lock.

Answering Bhagirath’s devotion,  Shiva unlocked his matted hairs at Gangotri, today this place is known as Gangotri, now,  since  Mother Ganga flow-through of Shiva’s Jata (hair lock ), she is also known as Bhagirathi but when the river Bhagirathi meets with Alaknanda at Dev Prayag,  Bhagiriathi named as “ Ganga.

Dev Prayag town is the winter seat of the Pandas (Priests ) of Shri Badrinath Dham & temple. After closing the Badrinath Dham & Temple for six months, all priests, travel to Dev Prayag, at the confluence of the Bhagirathi and Alaknanda rivers for the Pind Daan rituals.

Who are the Pandas?

The Pandas who are experts traditionally officiate the Pind Daan ritual? Pind Daan is specific and the most vital ritual or worshiping for the departed souls of ancestors or to bring liberation for the ancestors. Pind is a kind of symbolic offering observing prescribed rituals in Vedic scriptures.

What is the Pind?

Pind is loosely translated as a ball of rice or barley flour mixed with milk, honey, and sesame seeds, and the ball symbolically represents the no-physical form of the soul.

The beautiful and godly beauty of this holy Devprayag Uttarakhand draws the attention of many tourists and foreigners as well here and according to Hindu legend, Lord Rama and King Dushratha meditated here. For the visitors who have faith and devotion in their hearts, they must visit the divine Himalayan town.

The ancient and stone-made temple of Raghunathji is said to have been built some 1000 years ago and massive Himalayan stones are used to build this temple.

It stands tall upon a plinth, in the upper section of the holy town Dev Prayag and comprises a cupola with a golden onion-shaped ball and spire. 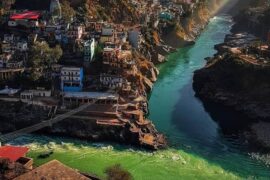 Rishikesh to Devprayag: A Quick Travelogue