Uttarakhand Travel Guide- All You Need To Know

This Uttarakhand Travel Guide is all you need to know top places to see in Uttarakhand, how to travel there, travel costs, and more. Learn more about Uttarakhand here.

Uttarakhand is a stunning state nestled in the heart of India. One of the most popular destinations in the country, it attracts a large number of Indian travelers every year offering them a tranquil escape from their daily lives.

This is where you’ll find not just the snowy peaks of the Himalayas but also enchanting lakes and rivers collectively known as the Char Dhams (the four religious sites) which include Gangotri, Yamunotri, Badrinath, and Kedarnath where pilgrims venerate their Hindu Gods.

If you are wondering which of the two states, Uttarakhand or Himachal Pradesh is perfect for you, allow us to give you some information about them so you can make the right choice. S

It is surrounded by the lofty mountains and pleasant hills, both these states are alike in terms of natural beauty and scenic landscapes. While Himachal Pradesh is more widely known as a tourist destination, Uttarakhand on the other hand attracts tourists who are more involved with religious matters.

Moving forward in our Uttarakhand travel guide, here are a few useful tips you can use so as to enjoy your Travel Uttarakhand – and remember to stay safe!

Top Places To See In Uttarakhand

Rishikesh is the yoga hub. Every year thousands of tourists come to learn yoga and meditation. Naturally, there are hundreds of yoga schools to choose from.  It was in Sivananda Ashram that I took my first steps toward learning the art of yoga, and it proved to be an uplifting experience. While it would be ideal to plan a stay of around 2 months,

Jangalia Gaon is a destination between two larger cities, but it’s totally worth the trip. The scenic views in this small village are simply breathtaking; any professional photographer will want to capture them on film.

Located around 35 km north of Bhimtal near the border of Uttar Pradesh, and also close to Almora (approx. 25km away), Jangalia Gaon is a great stop for those who want to experience this village-like holiday like you never have before!

Learning Snowboarding in India- A beginner-level 6-day course includes your cost of food, room, and board at no more than 15,000 rupees. Auli also has a chairlift-car ride as well a number of trekking routes and camping opportunities. After I sat down with some locals during the summer to have a chat about some adventure activities I participated in Auli during my visit.

The source of the Pindari River is the Pindari Glacier, found in the southeastern portion of the Nanda Devi Mountain ranges. The 5-day trek to the source of Pindari is rather popular among serious trekkers and tourists alike.

It is also possible to see glimpses of Panwali Dwar peak (6683m) Maiktoli peak (6853m) and Nanda Devi peak (7816m) which is the 2nd highest peak in India, and the 23rd highest across the globe.

As I’ve already discussed, for travelers coming to Uttarakhand, Chardham is the main feature drawing them here. The four sacred sites of Gangotri, Yamunotri Badrinath, and Kedarnath are the most popular ones in Chardham among all spiritual travelers who wish to visit these places.

The Spiti Valley and Ladakh are regarded as the two most popular destinations in the Himalayas for motorbike tours. Unfortunately, despite its stunning topography, Uttarakhand hasn’t gotten a lot of attention over the years; tourists often stay away since they have heard it isn’t easy to organize numerous bike trips in such a relatively inaccessible region

the evening Aarti in this city, in my mind, still remains unsurpassed and truly is one not to be missed! Also, as it takes place right near Har Ki Pauri, which is an ancient holy site for Hindus, it only offers up to 45 minutes worth of darshan time before taking you back to your quiet accommodation at Rishikesh or other spots nearby!

Darma Valley is widely considered to be the best tourist location in the entire state of Uttarakhand. In fact, I’d go as far as to say that it is my personal favorite location out of all (and there are many!) places in this beautiful part of India.

According to epic mythology, the five peaks of Panchachuli represent the last meal cooked by the Pandavas before mounting their chariot to heaven.

It is believed that this place is where Lord Krishna offered them food as a farewell gesture upon their departure. It was called `Panch Tirtha’ which means `Five Sacred Rituals’, hence these five peaks have been given the name Panchachuli or ‘Five-pointed Oven’.

The state of Uttarakhand has a new motorized trail on Kailash Mansarovar Road that takes tourists from Dharchula to Om Parvat and Adi Kailash in only two days.

This Kailash Mansarovar road was built like a dream come true for all bikers who have been waiting for such an opportunity. It is at Lipulekh Pass, on this road, that India concludes its territory to Tibet (now under China).

The cost of traveling

Food in Uttarakhand is both delicious and cheap. Good news if you’re on a budget like so many of us are! Just go to almost any seemingly cheap-looking restaurant and ask for an “all you can eat” or “Thali”.

This standard traditional Indian food gives you unlimited rice, chapattis, dal (lentil curry), and some kind of mixed vegetables – all at the cost of 70 rupees

Accommodation costs can be as low as 500-800 per night depending on the time of year you go, but it isn’t unusual to find high-value rooms of comparative quality for prices as affordable as these! 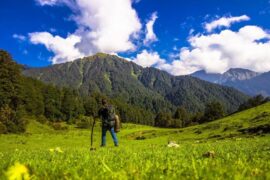 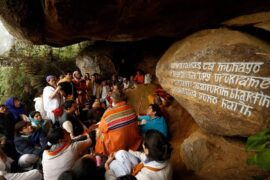