Rishikesh Temple-  The Most Mysterious & Divine

Rishikesh Neelkanth Temple  is the most searched on the Internet but Bharat Mata Mandir is truly an ancient & mysterious Rishikesh Temple in Uttarakhand Himalayas, India.

The Rishikesh Temple Uttarakhand is the most happening place in Uttarakhand people around the world visit this place to learn Yoga and take part in adventure activities. Besides these pilgrims come here to take a dip in the Ganga and visit these Mysterious & Divine Temples to absolve one’s sins.

Other than that many ancient and historic temples are located in and around the Rishikesh. However, they are a few enigmatic temples in Rishikesh that make pilgrims awe.

Lets us have a look into some of the mysterious temples in Rishikesh, why it is considered mysterious? The legend and the spiritual importance of the temple.

Rishikesh Shiva Temple- A divine Neelkanth Temple has a great spiritual importance temple located at an altitude of 1675 m which is 25 km from the Rishikesh. Moreover, this holy temple position near the great Nar Narayana Mountains which is believed to be the third Incarnation of Mahavishnu as Nar Narayana Maharishis.

Pilgrims generally before entering the temple here they take a dip in the natural Springs near the temple. The mystery of the temple is the Shiva Linga in the main sanctum is different from the other normal Shiva Lingas.

Suggested Read – The 13 Experiences You Must Live in Rishikesh

During Samudra Manthan, devas and asuras used Vasuki as the rope and the Mahendra mountain as the churning tool whereas Lord Vishnu incarnates as Kurma to hold the mountain on his back for churning.

While churning different hard-to-value assets came from the ocean. Among these, a terrific poison that kills all the living organisms in the universe came out of the ocean.

All the Devas and Asuras were terror-stricken started praying to Lord Shiva. To save the world Lord Shiva the supreme being drinks the poison.

Due to the effect of poison, his throw turns into Blue from then he is popular know as Neelkanth.

Rishikesh Famous Temple is located on the top of the hill in Theerthanagiri, Which gives an extraordinary view of the Rishikesh. The mystery of this temple is the main deity Lord Shiva is in the form of Linga.

Here the linga is encircling by ten bells in all four directions. The mysterious part is no bell resembles the sound of another bell sound.

Legends of the Bhootnath Temple

During the marriage of the cosmic couple Lord Shiva and the Sati Devi. Lord Shiva when he came from Mount Kalish, stayed here overnight by resting along with the other Gods and demigods and his disciples.

Due to this one can view the idols of other deities as well here.

The mystery of the divine Bharat temple is nothing but the numerous stories and all three major sectors of Hindisum in one temple. Vaishnavas, Shaivism, and Shaktism.

The main deity of the temple is Lord Vishnu in the form of the Hrishikesh  Narayana. Other deities inside the temple premises are Bhadra Kali temple(one of the Shakthi Peetam) and the Pataleshwar Mahadev temple.

Jagadguru Adi Shankaracharya reinstalled the presiding deity in the temple on the day of Basant Panchmi in 789 A.D.

Once Raibhya Rishi did severe pence to absolve the curse of the Bharadwaj  Rishi. Lord Vishnu got pleased by his penance and appeared before him to bless.

Lord said he will be residing in this place in the form of Hrishikesh  Narayan. whoever prays him as Varah in the Satya Yuga, Parashuram in Treta  Yuga, whereas Vamana in Dwapra Yuga and Hrishikesh in Kali Yuga will get liberation(Moksha).

Besides this, there is another legend to this the place is where Bharatha younger brother of Lord Rama did penance.

This temple is dedicated to Virbhadra a furious form of Lord Shiva. This powerful temple located in the Virbhadra town close by Rishikesh.

One can reach this place through the local railway station. The Virbhadra railways or hire a taxi as is situated on the highway of Haridaw and Rishikesh.

Legends of the Virbhadra Temple

When Goddess Sati Devi immortal herself with her mystic power as she could not bear the insulting words uttered by her father Daksha Prajapati towards Lord Shiva.

As she came to this Yajna even though Lord Shiva restrained from attending the Yajna. When the unfortunate news reaches Lord Shiva he could not bear the loss of his beloved wife.

With great grief and anger, the Lord creates a very furious and powerful form of Lord Virbhadra. By pulling a hair from his matted locks.

Suggested Read –  The Most 8 Popular Waterfalls in Rishikesh – Dehradun- Mussoorie

The main deity in the holy shrine is Shatrudhna youngest brother of Lord Rama. Apart from this, there is one more temple to Shatrudhna in Kerala a southernmost state of India.

Distance from the railway station to the temple is 4km this beautiful holy shrine is on the banks of River Ganga in the Rama Jhula.

The mystery of the temple is this is the main deity of the temple. Whereas another name for this temple is Adi Badrinarayan. Pilgrims visit this place before going to the Dham yatra.

The meaning of the name Shatrughna is the destroyer of evil.

The divine and popular temple in Rishikesh, the mystery about this famous temple in Rishikesh is the architecture of the temple which is a 13 story building that resembles the abode of Lord Shiva. Besides these, there are other god idols as well.

Iskon Temple in Rishikesh is known as Madhuban Ashram, which is perched on the bank of the Ganges near Muni -ki Reti, literally “Sands of the Sages” traditionally Rishikesh is a gateway for the Do Dham Yatra to Badrinath, Kedarnath,. It is here that the Ganges travels into the plain from the Shivalik Mountains’

These are the most mysterious temples in Rishikesh. Plan a visit to these mysterious divine temples and get the blessing of God. 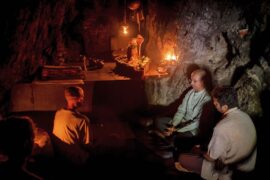 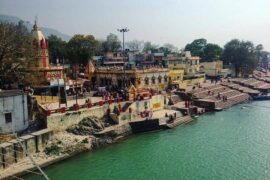 Top 51- Places to Visit Rishikesh and Things To Do

Waterfall Trekking in Rishikesh -Why do Tourists go at Night?