Dunagiri Temple: The story of how Pandavas built Dunagiri

Dunagri Temple was built by the Pandavas during their exile over two millennia ago. The Dunagiri temple is dedicated to Goddess Durga, situated near Dwarahat.  The temple site offers a panoramic view of the region and is considered one of the most exciting locations in all of Uttrakhand, India.

Dunagiri Temple Dwarahat which is dedicated to Goddess Durga is located in the town of Dwarahat. This five-thousand-year-old temple was built by the Pandavas during their exile. The present This structure has recently been renovated to its former glory and remains a timeless piece of architecture.

Dunagiri temple is a part of DRONANCHAL temple, which was moved by Lord Hanuman during the Ramayana period when Lord Laxman could be cured only with Himalayan herbs (Sanjiwani).

The legends believe that when Lord Hanuman was carrying the Sanjivani Buti (or Life-Giving Herb)  to Sri Lanka from India, a small piece fell here, and since that day the place came to be known as Dunagiri.

Dunagiri Temple Temperature is moderate, at an elevation of 2,650m, and has about 500 steps that are disabled-friendly and well-illuminated for pilgrims to visit the shrine freely.  The main attraction of this pilgrimage site is the presence of an ancient Banyan tree, under which Swami Samartha Sadguru Swami Samarth Maharaj used to meditate (also known as Mahavatar Babaji).

Dunagiri Temple Uttarakhand is covered with black granite stones and has a small sanctuary within its enceinte. Wide corridors and stairs at different levels have been constructed to make it easy for people from all walks of life to climb up toward the shrine.

It is surrounded by lush green & thick forest of pine & deodar. The mind become so calm in the cold breeze and spectacular view of the mighty Himalayas.

A must-go place. 15Kms from Dwarahat and  33Kms from Ranikhet.  Approx 300 km from Rishikesh.  You can reach by train from various places like Nainital, New Delhi, Lucknow, and Dehradun. . 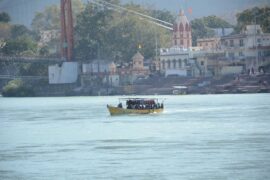 Yoga Centers in Rishikesh: Tips for Your Yoga Classes 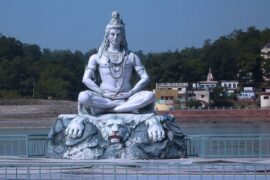 Shiva Statue Rishikesh: Where is it located?