Dharchula town is a delightful destination for mountaineering, trekking, adventure enthusiast, birder, and Kailash Mansarovar pilgrims as well. It is a blissful stopover for the Mount Kailash pilgrimage and an ancient gateway to the Kailash Mansarovar Yatra.

This serene town is skirted by the high sky soaring peaks and it sits in a valley along the Kali River. If you are here, on the westside, you see the great Panchachuli peak. It is an ancient trade- route between the India-Tibet

The government has converted the ancient route to an 80 km long road – the Pithoragarh-Tawaghat-Ghatiabagarh road. The road starts from  Ghatiabagarh and terminates at Lipulekh Pass, an ancient gateway to Kailash Mansarovar Yatra. In this 80-km road trip, you jump up from 6,000 feet to 17,060 feet above sea level.

The new route involves driving from Delhi to Pithoragarh (490 km), after which there are 130 km of road and 79 km (about five days) of trekking from Ghatiabgarh to Lipulekh Pass across the border; on the other side, it is a 97-km car ride and 43 km Parikrama around.

Dharchula sets out as an ancient gateway to the Kailash-Mansarovar Yatra. It is the traditional route where our ancient one chose Dharchula village as Tapobhoomi ( penance grounds ).

The place was lived by Byas Muni.  The sage Byas Muni chose this place to meditate before going on the Kailash Mansarovar Pilgrimage.  It is said that  Pandavas visited this place and met here Byas Muni during their exile.

Suggested Read – Champawat – Known for It Beauty and History

The Kapileshwar Mahadev Temple is about 3 km from Pithoragarh city. You have to take an hour-long climb to visit the temple.

The temple is inside the cave that immerses in nowhere.  The cave is deep and you have to go through many narrowed small caves, will be a thrilling activity here.

Ascot is the most famous wildlife sanctuary in the Pithoragarh district. the sanctuary is about 5o km far from the center an elevation of 5,412 ft above sea level. The sanctuary is populated by the Askot Musk Deer.

Suggested Read – Kedarnath- How To Reach & Where To Stay

It is  Lord Shiva and Goddess Jayanti temple. You have to take about a 4-km uphill trek, witnessing wildlife and natural scenery.

Milam Glacier is at the height of 4250 meters above sea level. Once  Milam village was a densely populated district village, now there is almost nobody lives. In spite of zero population, it is still the world’s famous glacier. The river Gori runs down from Milam glacier and it is confluent of the river Kali

Chand king was built this fort and rebuilt it by the Gorkhas in 1789. It lies on the mountaintop in the neighborhood of the Pithoragarh. It offers the most stunning ariel views of Pitthoragrh City. 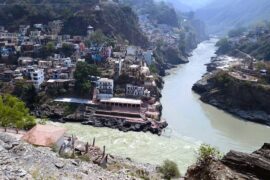 Dev Prayag- The Significance of the Pind Daan Ritual at Sangam